The Secretary General of the Eurasian Peoples’ Assembly Andrey Belyaninov sent a greeting to the XVI Sevastopol International Festival of Documentary Films and TV Programs “Won Together”.

In particular, it says:

“The unforgettable deeds and heroic victories of the peoples of our country, the CIS countries, the Baltic States, China, as well as other allies in the anti-fascist coalition are a triumph of philanthropy, independence and freedom. The theme of historical memory of those events is constantly reflected in the cinema. This problem sounds in a new acute way today, when attempts to falsify the past have become more frequent in the media.

Over the years of its existence, the festival has become a major cultural event worthy of the glorious city of Sevastopol, its history and traditions. Created on the initiative of the Heroes of the Soviet Union living in Crimea, the festival is successfully developing year by year, growing, and gaining a Eurasian scope. Today, “WIN TOGETHER” is a platform for bringing together representatives of the Eurasian space who use the language of film and television creativity to protect historical truth. The festival contributes to the expansion of international cultural cooperation, the strengthening of humanitarian ties, the establishment of good neighborly relations between peoples, reflecting the history and culture of Eurasia in the mirror of modernity.

We consider the holding of the “We won together” festival as an opportunity for the practical implementation of the goals of the Eurasian Peoples’ Assembly, which unites people regardless of gender, race, nationality, religion to strengthen harmony and unity, complementing the efforts of state organizations in preserving peace and understanding among the peoples of the continent.

I sincerely wish all participants of the festival creative success, bright discoveries, spiritual meetings that inspire us with the memory of the heroic pages of our common history!” 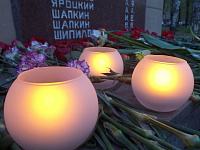